I’m watching Itaewon Class because my nephew told me he watched it and thought it was a very clever series. The word clever intrigued me because we rarely use it to describe a tv drama. So I wanted to find out what ticked for him.

Make no mistake about it, Itaewon Class is a revenge series through and through but getting back at enemies can take different forms.

The best possible revenge, in the eyes of idealistic Park Saeroyi, is to beat those who bullied him in their own game while holding his head high as a man, as a boss.

Win without being despicable like the people who kicked you. Show them what it means to be a men’s man.

This young man in his 20s understands the most important ingredient in business and life is people, people and people.

He bucks the trend of the typical millennials and I like that.

He sticks to his belief that no matter how bad a situation is, you never sacrifice the folks dear to you. I approve of that.

I’m 60% through with this series but I already know how this will end.

Not that I can’t take twists but I’m still a romantic who prefers an ending when underdogs win.

I want all the Saeroyis in the world to triumph. 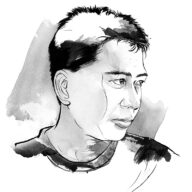